As I walked into Time Square NYC at 8pm on a Saturday night, surrounded by conflicting messages on bright billboards of what beauty is in our society, I couldn’t help but feel nervous for what was about to unfold. Thousands of people from all different ages, backgrounds and nationalities congregated, taking selfies in the iconic scenery of The Big Apple oblivious to what I was about to do. 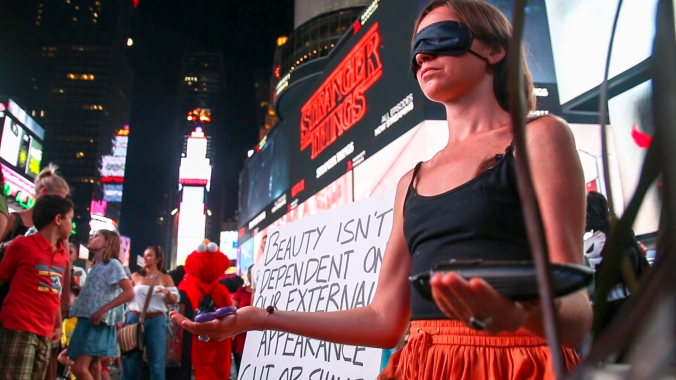 Although I had spent hours predicting all the things that could go wrong with the experiment as soon as I placed the blindfold over my eyes and was sitting in darkness a warm sense of trust washed over me. I had two friends, Stephanie and Peter in the audience looking over me but I also trusted the people of NYC to connect to the message of self-acceptance and not take advantage of the situation. Being a catalyst for change was a risk I was willing to take to start the conversation about our societal definition of beauty and address the shame that is often attached to the perfectionism we try to uphold.

I’d been reading Brene Brown’s work in the weeks leading up to the experiment which had sparked dialogue of the damaging role of shame in our society. Shame isolates us whereas vulnerability reminds us of our shared humanity. Through reflecting on my own life and the expectations I had placed on myself on how I wanted to be perceived by society, I realised that I had interwoven my sense of femininity and beauty with my long hair. I would spend hours trying to perfect my ‘look’, governing my sense of happiness on whether I felt beautiful on the outside. This created extreme high’s where I felt invincible and poised but withdrawal into shame and a need to earn my worth when I felt ‘ugly’. This continual judgement of my external appearance was draining and lonely. It separated me from the one thing I wanted the most, to know that I wasn’t alone.

As I knew the experiment was provocative I was prepared to wait for hours for the first cut to be made. I didn’t even have time to think about what was happening when all of a sudden the scissors were taken out of my hand. Snip. The first lock of hair fell to my lap. Soon after another person stepped forward and then there was stillness. The deep voice of an officer was the next thing to come. I was asked to move to a different location, which I willingly followed. Although I was not asking for money I was moved to the ‘busker and character zone’ where locals dressed up in a variety of costumes to provide entertainment and photos for tourists. This provided an interesting contrast but I was committed to following the experiment through to the end.

It took a long time for people to realise that I wasn’t asking for money, so I sat and waited for what seemed like hours. After a while doubt started to arise in me. I questioned if I was asking too much, if people didn’t understand my message, if they were offended by the message or if I was being perceived as a drama act for others entertainment. Whenever I got too carried away in my thoughts I just came back to my breath and waited patiently. Slowly but surely people started coming up, always choosing the scissors and taking off a very small amount of hair. I could sense the fear and hesitance in many of the participants as they were processing what they were about to do. When the first person picked up the electronic shaver a huge smile came across my face. After the wait I was ready to take a leap of faith with this stranger and am forever grateful to that person for taking such a courageous action.

Just when I thought there was momentum picking up, as I had already been sitting down for an hour or two, I was asked to move again, this time by the NYPD. I was led blindfolded by Steph to a new location, still in Times Square but on the edge of the busking area. Third time lucky. I intuitively knew that this was the last time, the next time I would move the experiment would be complete.

At one point a member of the public ran away with the scissors as a rebellion against the message. I remained in full trust that they would be returned to me as I understood that I was there to be a catalyst and evoke a wide range of emotions. It’s interesting that the human experience is so varied and when we start addressing issues that evoke shame, such as body image, people will respond in funny and unexpected ways. I knew in my heart that it was never my intention to offend anyone, what I was asking was for people to reflect on what they are attached to in their lives and ask where that attachment comes from, especially in the field of beauty. Thankfully the scissors were returned to me.

After over 3 hours of sitting on my little stool, my radical public hair cut was complete. I slowly removed my blindfold to reveal the crowd of friendly strangers that surrounded me, reflecting back to me the happiness that I felt inside. I had no idea what I looked like but I didn’t care either, I just allowed myself to be happy. Even though I was so scared of what I would look like without hair I now know that every time I look in the mirror I will see a courageous woman staring back at me, someone that I can be proud of.

Written by Jae West co-founder of The Liberators International

Your monthly contributions are what enable us to continue creating these experiments for humanity.

1. Dance of Freedom
2. Pete's 12 Core Values
3. Sleeping with Danger
4. How & Why I'm connected to the Global Awakening
5. What is expected of us vs. what we want for ourselves
6. Viral Video from Perth Train Party!
7. Uncovering our Real Friends
8. The Often Forgotten Elements of Beauty & Sexual Attraction
9. Journey into the Unknown
10. What I learned living alone in the forest