Living inside local Indian and Australian families over the past 3 months has been an enriching experience like nothing i’ve ever experienced before. Having no previous connection with the people who have welcomed me into their homes and hearts has allowed me to discover something fundamental about humanity that I previously knew nothing about.

The thought started to develop a few months ago whilst experimenting with the idea of selflessly giving through southern India on the Reciprocity Experiment. Within the first 3 days of adventure I had already been personally invited back to live with an Indian family in a remote village of Kural, just north of Anjuna, Goa. As I continued to give myself, new gateways of opportunity presented themselves. Gateways I never knew existed and never expected anyone to show me. 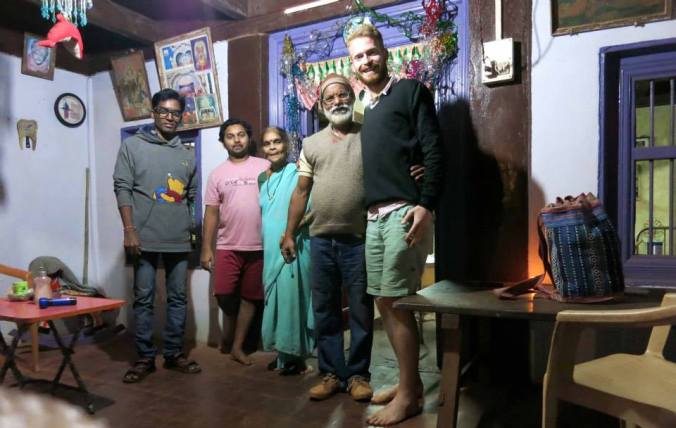 Being accepted as a family friend in a remote Indian village of Kural.

This was just the beginning of the life changing experience of being drenched in an expression of open love I had never felt with such vivid intensity before. What was it about the Indian people, culture and society that enabled them to show their love for people they had never met in their life on such a profound level? I was enchanted.

Through further exploration living with locals I later discovered an expression that many of the people used of which was “guest is god”. This started a chain of new thoughts in my mind, maybe this open love they were expressing with such intricate colour and detail was not directly coming from their hearts? Maybe it was in the name of their faith to behave this way to others they hadn’t met before?

I continued to dig ever deeper into the culture, now beginning to ask locals directly about if the expression really was the reason behind their open love and compassion. Half way into the experience I had a fascinating conversation with a beautiful Indian girl whilst crossing a river in a wooden boat in Hampi. The sun was setting and the light of the soft Indian sun reflected off the water to highlight her majestic features. I had only just met her and I decided to go directly to the question of love with the Indian people by asking her if it was really from their hearts or not. She was slightly taken back by the question at first and then continued to explain that much of the way locals treated tourists was indeed a show and it depended on various things such as the colour of skin and if you were a man or a woman. I felt confused, this couldn’t have been the truth…all of my interactions with other locals including with her personally felt so real and honest. 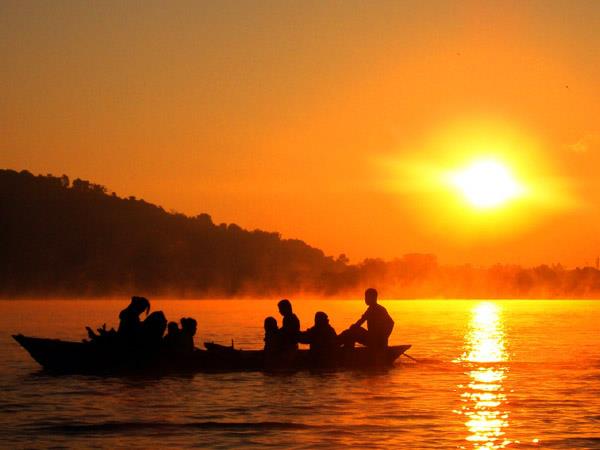 I progressed through my journey and the open love did not stop after I was told of this perspective, people I didn’t know continued to overwhelm me with honest kindness, compassion and support. I returned home feeling an incredible warm glow from what I had just experienced. Surely this was something that only occurred between foreigners and locals? This same expression would certainly not be the same in the Australian culture I thought I knew so well.

I returned home and was doused in the love of family and friends I had not seen in years and a second powerful wave came rushing through me. Positive energy had almost reached a dangerously explosive level so I decided to get away from it all by starting my adventure hitch-hiking through the south west of Western Australia. From the first night I hit the road, I was instantly picked up with love by Paul and Amy (story found here).

As I went further south the people continued to help in their own way, I was invited back into the caravan on the property of Janny and Pete (story found here). These people shared fresh homemade food with me, shared stories, taught me about permaculture and the geological rock formations of the area. After that I was warmly welcomed into the house of Colin, Racca, Jude and Lola. They showered me in kindness, love and acceptance for 2 weeks straight whilst their newly born 6 week old baby Lola was keeping them up late at night. The adventure of love continued as I was welcomed into the property of Gayle and John (story found here), an incredible retired couple living a few kilometres out of town. 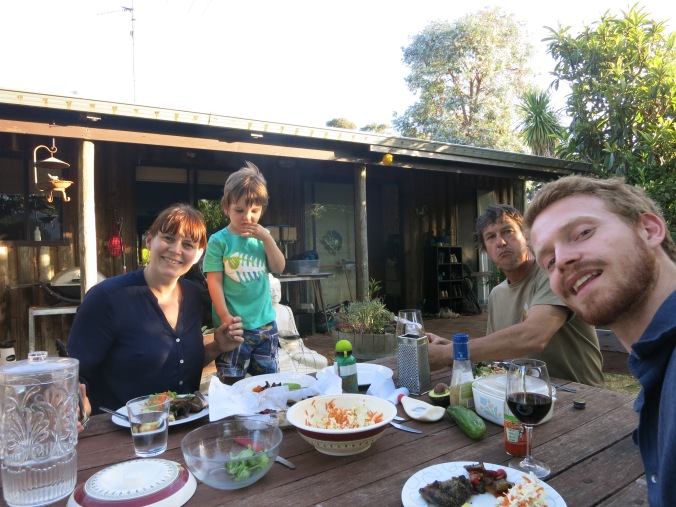 One of the many loving family dinners with Racca, Jude & Colin

These people have ALL expressed a form of open love similar to what I had experienced in India and I know for a fact that the people I’ve been staying with in Australia are not religious believers and i’m certainly not a tourist. So this got me thinking that this love I’m feeling must be coming from somewhere different. I asked myself, what was it that enabled this expression of love to occur?

After conversation and contemplation I realised how previously I had been protecting myself from receiving this love. Protecting myself from receiving love!? That almost sounds like a contradiction; don’t we all want to receive love? Just think, when we walk with our our destination in mind, when we drive our cars to the places we need to be to do things we need to do we effectively shut the chance of this form of love out of our lives. It can be easy to fill our entire lives with “things we need to do”. In our attempt to stay busy and on track we deflect others from having the chance to protect us in their own way.

It has been through the process of letting go, being vulnerable, asking for help and allowing others to come into my life that I’ve felt the touch of humanity in a raw and honest form. There has been no real reason for anybody to stop, talk and invite me back to live with them other than a deeper humanitarian streak running through the culture and it’s people. The desire to care for others runs thick within us all, we just need to be open to receiving it first!

How much protection are you under that’s effectively preventing humanity to show you how much it loves, guides and cares for you?

How much humanity do we block out of our daily lives?

1. Dance of Freedom
2. Pete's 12 Core Values
3. Sleeping with Danger
4. How & Why I'm connected to the Global Awakening
5. What is expected of us vs. what we want for ourselves
6. Viral Video from Perth Train Party!
7. Uncovering our Real Friends
8. The Often Forgotten Elements of Beauty & Sexual Attraction
9. Journey into the Unknown
10. What I learned living alone in the forest